I’ve been dyeing lots of doubles and even some triples lately– that’s two or three skeins of yarn, dyed as one long continuous gradient.  They’re great because they give you lots of yardage for larger projects, as well as some fun options for striping a single gradient against itself.

Sometimes, though, more options means a harder time figuring out what to do with a precious gobsmacker…  So I thought I’d start a series of posts with some pattern suggestions, featuring some of the amazing gobsmacked FOs that folks are posting in my Ravelry group.

First up, Pteryx, a brand-new design from Nim Teasdale! 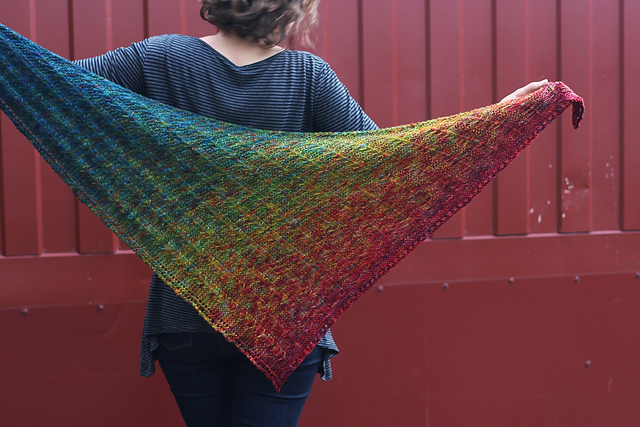 It’s a stunning textured triangle, knit sideways from a DK double.  The stitch pattern works beautifully with the dappled gobsmacked gradients, simultaneously mixing and highlighting the variations in colour.  The double provides a generous 420 m (460 yds) of DK weight, so the final shawl is squishy and warm– and big enough to wear easily.  Nim used a merino DK double for hers, but the pattern would be amazing in merino/ silk or silky yak DK as well. 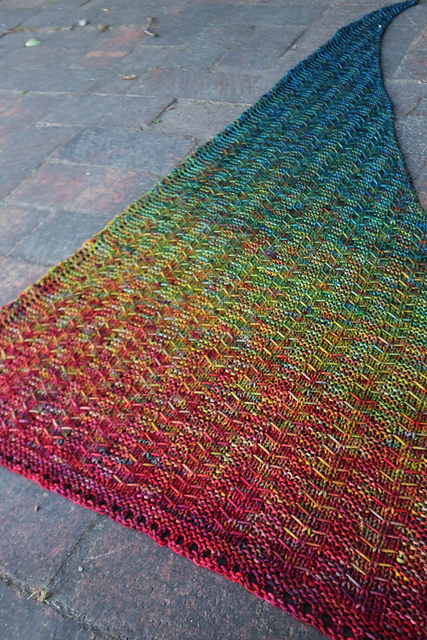 The textured stitch of Pteryx looks like the structure of feathers, or birds in flight.  Photo courtesy of Nim Teasdale.